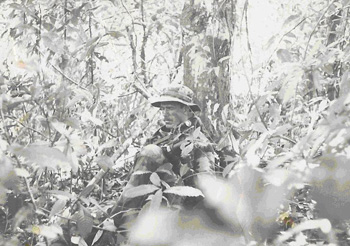 The late Dan Burke was a combat veteran of US Navy SEAL Teams, a prior-enlisted “mustang” who retired after eight years of active duty and twelve years of US Navy Reserves duty. He earned his B.A. in the Science of Creative Intelligence (summa cum laude) and M.A. in Professional Writing (with honors) from Maharishi University of Management in Fairfield, Iowa, where he served as Student Body President and wrote an undergraduate thesis entitled “Military Science & the Science of Creative Intelligence.” He organized introductory lectures on the applied benefits of the Transcendental Meditation technique and the TM-Sidhi program for top US military commands. He co-authored the article “Invincible Defense: A New ‘Secret Weapon’!” published by the Canadian Centers for Teaching Peace.

In the previously article published in the Sri Lanka Guardian and Post Traumatic Stress Disorders: PTSD News & Information, Dan tells how he found the TM technique to be “tremendously beneficial” during combat operations in Panama while serving with the US Navy SEALS in 1989. After two solid days of leading his SEAL team in this combat operation, sleep deprivation had seriously lowered his combat effectiveness and that of his men. After the deep rest gained from his short meditation, Dan gained an “unfair advantage” over his special forces team as well as his opponents. Wise warriors know that in war nothing is “unfair,” and therefore one takes whatever advantage one can to gain the upper hand.

Dan was not only a great warrior but also a deep thinker. He wrote: “Later in life I realized that, on the one hand, training for peak performance was a thrill and an achievement, but on the other hand, I was fully capable of serving in and leading top-performing groups without ever having to prove myself in combat.” Dan was wise because he understood the higher value of gaining victory before war by preventing an enemy from arising in the first place.

Sadly, Dan will not see the peaceful world that he so much wanted to help create. He passed away on 2 Feb 2011 from leukemia. But he leaves us with the charge to help build a better world through Invincible Defense Technology.